Steven Wallder has returned to the region he loves, bringing with him a diverse skill set, and his young family, to take on the position as Operations Manager at the Forefront Parkes workshop. 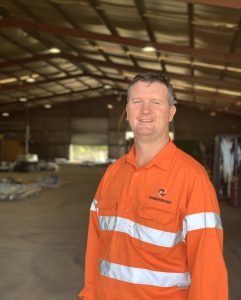 Originally a welder by trade, Steve spent ten years at Cadia working on a range of projects from construction through to mining activities. It was while Steve worked on the construction of Ridgeway Deeps block cave Automation level that he met Forefront’s Anthony Redfern.

“I was impressed about how Anthony spoke about his team at Forefront,” Steven said. “He’s passionate about his people and puts a lot of value on his guys, but he expects a lot from them as well. I found that culture refreshing and one that I was interested in being part of.”

Before securing a job at Forefront, Steve spent seven years strengthening his skills in project and team management as a Project Manager and then as Operations Manager at Minetek in the Hunter Valley.

“Minetek manufactured and supplied equipment all around the world,” Steven said. “I looked after a team in project management, engineering, production and warehousing, as well as onsite teams.”

Steve has now begun his role as Operations Manager at Forefront, moving with his wife and three children back to an area they love and exploring the region on his motorbike.

“My wife and I are from Condobolin and have lived in the Central West before so we’re excited to be living in Parkes and closer to our extended families.”

Boasting such a wealth of experience in project, site, and team management, Steve is eager to utilise his skills in the Parkes workshop.

“I’m excited I can put my stamp on something so integral to the Parkes community and the Forefront business. It’s a great team with diverse skills so I hope my direction and leadership increases efficiency in the workshop as we embrace technology to improve our processes and overall quality of the work we do.”

Our partners and customers

We work across a range of industries, including mining, agriculture and government agencies.